Service with a mask: Inside paid quarantine hotels in Visakhapatnam

I had to spend 14 days in quarantine in Delhi after arriving from San Francisco, USA, on what was probably the last flight into India before the clamp down on international air-travel started on March 22.

The lockdown followed on March 25, and I had to remain in Delhi for another 21 days. In this time, two friends and I decided to seek police permission to take a road trip by a private taxi to Chennai.

We were informed that such permission would be granted only in the event of a medical emergency, or in the case of a death, which required us to travel, and we met neither of these conditions. But the fact that we had completed mandatory quarantine, and had tested negative for COVID-19, meant that we could travel home.

We were issued a discharge certificate from quarantine, a negative test report from health authorities and a quarantine release pass by the Sub-Divisional Magistrate. The travel pass bore each of our names, its validity, the reason for travel, the registration number and make of the vehicle as well as the name of the driver. The pass also indicated that the vehicle was to return before the validity expired.

However, finding a vehicle to drive us to Chennai from Delhi was no mean effort. Taxi-hiring companies were wary simply because there was no food, lodging and public convenience. Even a puncture repair shop was unlikely to be open.

Finally, Umesh Singh, a small-time taxi operator in Delhi, who we got in touch with through a relative, was willing to offer his only taxi — an SUV — with two of his drivers, the amiable Bablu and Prem Kumar, to drive us to Chennai.

When we contracted Umesh’s taxi, we were unaware that one driver would be asked to leave due to the physical distancing norm, but we realised it shortly thereafter and jettisoned Prem Kumar at Delhi itself. Neither the driver nor us were aware of the route, so we relied on Google Maps.

The most convenient route would take us through Agra, Gwalior, Jhansi, Nagpur, Adilabad, Hyderabad, Ongole, Nellore and on to Chennai. Since only fuel bunks would be open, we were advised to carry enough food and liquids to last the entire journey.

It was also suggested that we drive non-stop as halting enroute may expose us to COVID-19 infection, if we came into contact with others. We were to carry soap and an adequate number of bottles of hand sanitisers. The lodging, where we stayed in Delhi, was extremely kind and packed us food that included sandwiches, vegetable kati rolls, fruits, dozens of drinking water bottles and juices.

As we were unsure of the availability of public conveniences, the hotel suggested that we eat light over the 37-hour trip (per Google Maps) to Chennai. What we found remarkable were the public conveniences at each fuel outlet, and the willingness to let us use it.

We commenced our journey to Chennai at 7.30 am on April 27 from Delhi, passed into Uttar Pradesh through Faridabad in Haryana, and headed towards the Agra bypass. 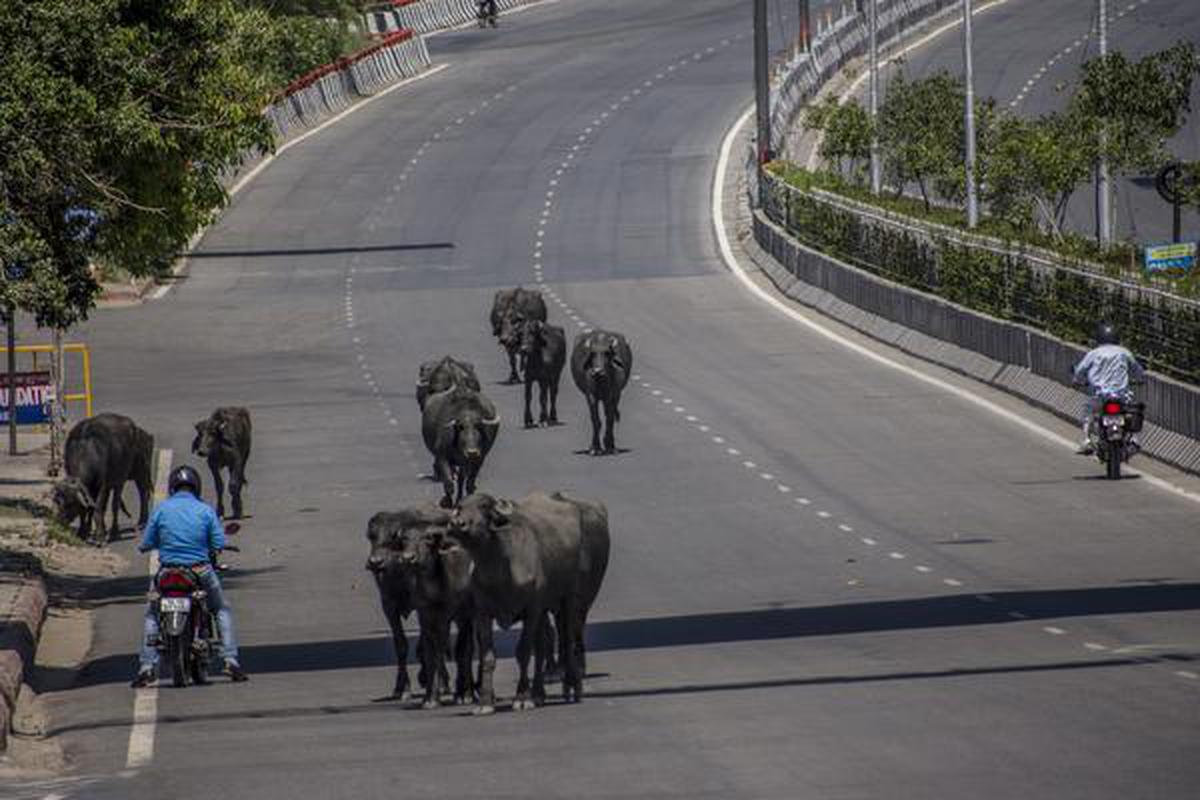 As there were no vehicles on the highway other than a few lorries, we hoped we could journey smoothly. At Agra, we were hailed down at a ‘check point’, temporarily created in each State and at district entry points to make sure vehicles have necessary travel permits, passengers travelling in vehicles adhere to physical distancing norms and, in some cases, to do a quick thermal test on the spot.

As our pass specified the destination as Chennai, we were not allowed to enter a town and had to stick to journeying on the highway. We were stopped for similar checks in Gwalior, Jhansi and in Nagpur. Google Maps indicated 19 hours as the travel time between Delhi and Nagpur.

However, lack of proper road signs misled us, and we went off the highway between Jhansi and Nagpur.

As we passed the town of Sagar while headed towards Nagpur, two different signboards — one diverting us off the highway and another indicating that we continue — caught us off guard. All this meant we had to drive non-stop for 20 hours to reach Nagpur. We were exhausted, as was our lone driver Bablu, and so we managed to request a hotel to give us two rooms to rest for a few hours because we had the requisite permissions. An associate of my friend, who met us near the highway in Nagpur as we set off towards Telangana, brought us food for the remainder of the trip. We headed towards Adilabad next, expecting the journey to take us four hours.

At the Adilabad check point, however, the scrutiny was very thorough — our documents with photographs was sent to the Collectorate for approval, pending which we could not continue our journey.

While some who had crossed the check point a few days earlier told us to expect a wait time of three to five hours, we seemed to have a bit of luck. Our documents were cleared in an hour, and we continued.

We stopped at a closed dhaba enroute our next stop, Ongole. We asked a man, who seemed like its owner, if we could stand under the canopy and have our meal. He was considerate, and offered us a couple of chairs to sit and eat our meal. While there, we noticed several people, men, women and even young children, walking along the highway; we had spotted them in the morning too on our journey from Nagpur to Adilabad.

A health inspector, who was sitting on one of the chairs at the dhaba, explained that these were migrant labourers returning to their villages in Uttar Pradesh from Andhra Pradesh on foot, travelling, in some cases, nearly 1,300 kilometres. It was a heart-wrenching sight. 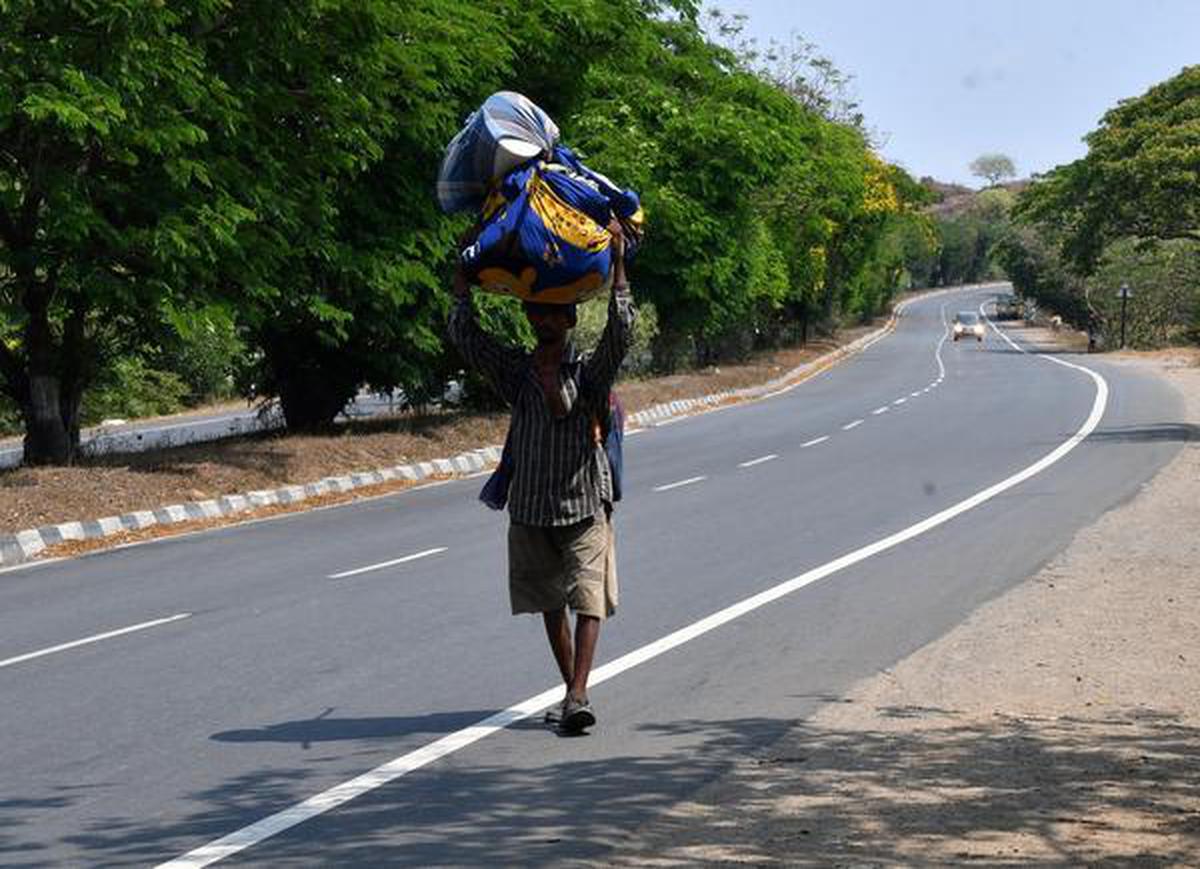 CHENNAI, TAMIL NADU, 11/04/2020 : A migrant worker carrying heavy luggage walks on the Chennai -Tiruchi National Highway in Mamandur on April 11, 2020, during the 21-day government imposed nationwide lockdown as a preventive measure against the COVID-19.
Photo: B. Velankanni Raj

Some dhabas were cooking and offering them free food, the health inspector told us. Along the way, lorries were stopping to help them: even though they were laden with goods, the drivers were allowing people to climb onto the tarpaulin and travel some distance, if not the whole, without charging them any money.

We continued our journey towards Chennai, but entering Andhra Pradesh from Telangana was an unpleasant experience. We were detained at the check point, and it took almost two hours before we were permitted to continue.

Thus, the journey from Nagpur to Ongole took us another 20 hours, but we were fortunate to be lodged for a few hours by a benevolent mill owner, a friend of a friend, in his guest house on the Ongole highway. We left for Chennai early next morning, hoping to reach in six hours.

However, we were once again stopped at a check point between Andhra Pradesh and Tamil Nadu at Gummidipoondi, and were subjected to similar questions and document scrutiny. In spite of offering all requisite evidence of good health, we were asked to wait for clearance from health authorities that delayed our entry into Chennai by three hours.