Clothing label Ilamra is for those who believe in sustainable fashion

“It is the building with red hearts,” says a person from Aneeth Arora’s team, directing me to a large yellow bungalow on Barakhamba Road. There are different-sized hearts everywhere — in an installation out on the lawn, dangling in the porch, and painted on the building. ‘Time to Love’, péro’s 10th anniversary homage to people and processes, is all about slowing down to appreciate the time it takes to create garments. “We are so caught up in this fashion cycle of doing one season and trying to be fresh every six months. We’ve lost the enjoyment of the process. The idea is not just to invite people into our world, but for them to come and view what goes behind it,” says Arora, as we sip chai and eat Parle-G biscuits from a thelewala within the courtyard of the house that was once an orphanage.

He is a live installation of sorts, capturing the slow life of sitting down on moras and watching saris waft in the breeze. The 50 pieces of fabric, from 15 to 20 regions of India, all hung on bamboo poles, are part of another installation that represents the brand’s ethos of creating their own textile. Each has a line embroidered on, about what the fabric is, where it is made, and how long it takes to make: “Cotton Silk Kota Doria, handwoven, 300 cm a day in the ancient Rajput city of Kota on the banks of the Chambal River in South Rajasthan,” reads one piece.

“We decided there has to be a time aspect to everything we showcased,” says Arora. So when you walk in, there’s a seamstress working on a garment. In front of her is a screen that shows a time lapse video of how the garment has been built over a number of days. “I told the women, ‘Aaraam se karo’ (work slowly), and the joy that they felt when I said that you could see it in their work. The hemming became so beautiful.” The garment was slated to be done in time for a show planned on March 12, as part of the now-postponed Lotus Make-up India Fashion Week. The SS 2020 collection, named Millefiori (‘1,000 flowers’ in Italian), revolves around a technique of the same name that was originally used to create mosaic beads in glass. péro will use polymer clay for the first time, to fashion its buttons in a similar fashion. The exhibition began during the time of the India Art Fair, carried on through India Design ID and was meant to finish with the fashion week, so three sets of professionals could view it.

Despite that, there has been no rush to ‘complete’ the exhibition by a particular date, and rooms have been added slowly. There is a scarf room to show the different dimensions and kinds of edging done across the decade of péro’s being; a ‘Matching Centre’ where cloth is stacked, a heart at its centre; and a button room that shows more than 3,000 buttons done to date. In fact, one season, when the brand did polka dots (2013), they created 1,000 buttons. When Arora realised this, she says it made her pause: “It is making me think whether my processes are right, because maybe I’m overindulgent. Maybe I’m doing too much… Should I be impractical like the way I’ve been or should I now start to become more practical in my processes?” 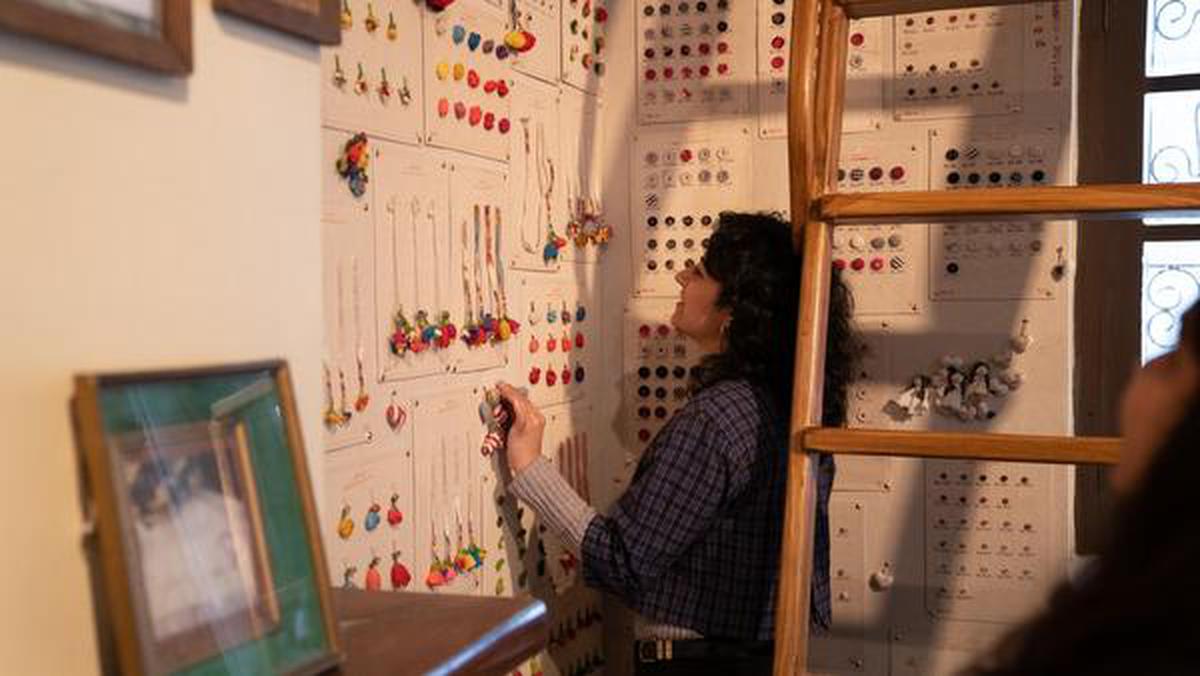 The room that’s meant to induce goosebumps is the one that houses a white tent that looks into a pool of water, its reflection creating another perspective. Commissioned by the Devi Art Foundation in 2015, as a part of their show called Fracture, it is a 11 x 9 x 8 foot white crochet and lace creation that took 50 people 18,000 hours and three lakh metres of thread to create. This element of the process being collective is what Arora has tried to establish, but refusing to be the brand’s face (she enjoys being its voice though) has not been easy, with publications even refusing to do stories around it. “It is always a collective,” she says, adding that she’d rather the work speak for itself. Today, when people call the workshop they’ll ask if it’s péro speaking, and that makes her happy.