In the high-wattage fashion industry, one man stands apart. Imran Amed is someone whose dinners are attended by the Kardashians, who quickly puts together a panel with Deepika Padukone and Sabyasachi Mukherjee while on a whirlwind trip to India, and whose persuasive powers can get Tom Ford to pose for the cover of the first edition of his company’s print magazine.

Amed’s The Business of Fashion (BoF) — a personal blog he started in 2007 for friends and family — has today morphed into a virtual bible for the fashion industry. Each morning, a BoF email hits the inboxes of 7,00,000 registered users, with a mix of original stories and links to news and features about the fashion industry. A recent sample: how UK consumer spending is down, how to launch an influencer brand in 2020, and what fashion brands need to know about the coronavirus. The emails are a must-read not just for the industry’s most influential folks (from designers Tory Burch to Anya Hindmarch), but also for anyone with even a cursory interest in fashion. With BoF, of which he is CEO and editor in chief, Amed, 44, has cemented his reputation as the oracle of style. It is no wonder that in 2018 The Guardian called him ‘fashion’s most influential man’. Last month, I spent time with him in Davos, where he had come to attend the World Economic Forum. It was his first visit — WEF’s dates overlap with the Paris haute couture shows — but this year he made it a point to attend because of an issue especially close to his heart: fashion and sustainability. BoF recently reported that in 2019, 114 billion clothes were sold globally (amounting to 15 new pieces per person on Earth).

There are other daunting stats, too: according to the UK-based Ellen MacArthur Foundation, global clothing production has doubled in the past 15 years, and a projection by the Pulse of Fashion Industry report states that by 2030, the apparel and footwear industry is set to grow 81%, while textile waste is set to increase 60%.

Influencer with a twist

It is no wonder that sustainability is the topic du jour. Take, for example, this year’s Oscars, what with Margot Robbie and Lily Aldridge wearing vintage and Jane Fonda re-wearing a gown she wore to Cannes in 2013. “It has come up in every conversation I’ve had in Davos, and it is why I am here, because the fashion industry is really trying to take its role in this wider sustainability challenge more seriously,” Amed tells me.

We meet at the sprawling WIPRO lounge on the main Davos Promenade. The former McKinsey consultant and Harvard MBA graduate is nothing if not global. He lives in London, but was born in Canada to East African parents of Indian descent (you can hear traces of a Canadian accent). He comes across as curious, measured and very bright, and he travels incessantly — in early February he has criss-crossed through Brazil, New York, and San Francisco. When we meet he’s wearing many hues of blue: navy striped woollen Pero trousers, a Loewe turtleneck and a printed sweater by the chic Japanese brand, Sacai. He also carries around a small black notebook in which he takes copious notes. For someone at the forefront of a digital media empire, it is oddly quaint. 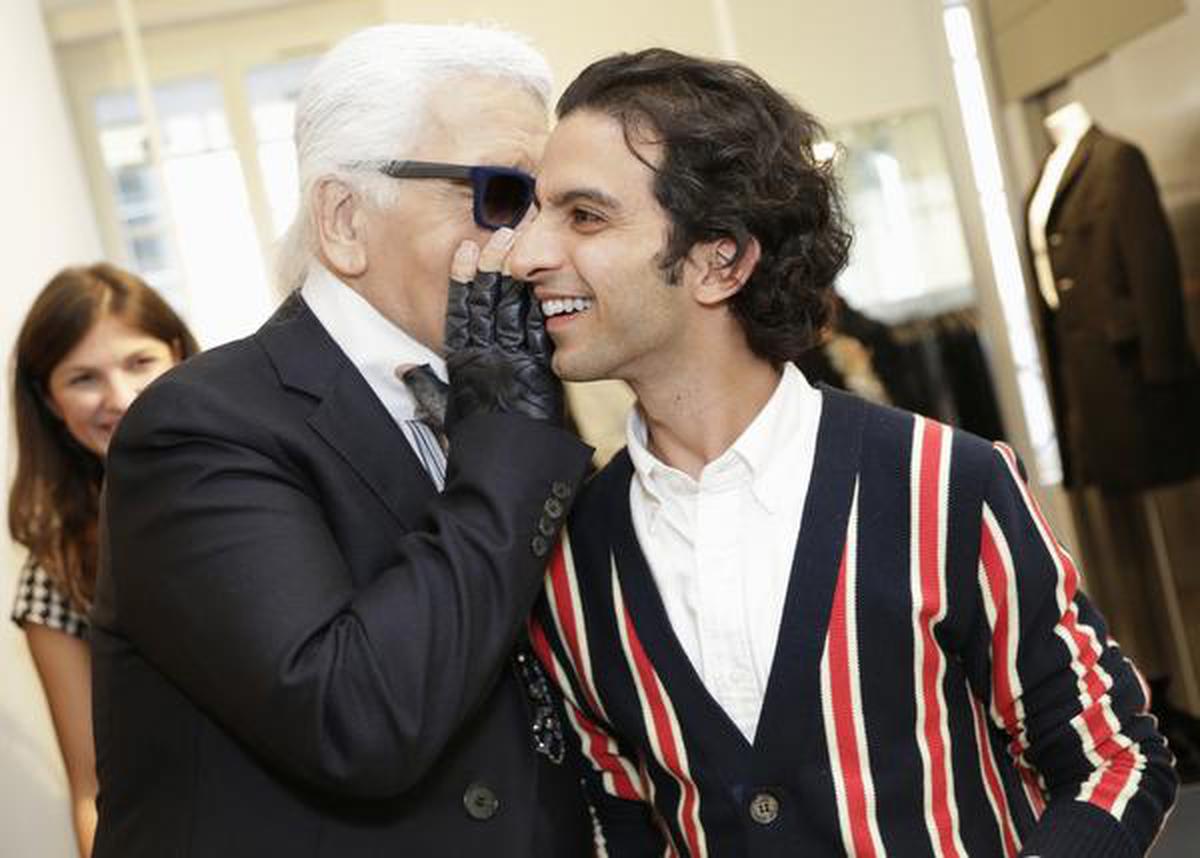 “One of the things we’ve been challenging the industry to think about is a new narrative around consumption,” he says. But isn’t fashion all about desiring the new? “There’s this apparent contradiction between sustainability and growth,” he agrees, adding, “When I went to business school, we were taught that healthy companies grow margins, profits and revenues. But this kind of model — focussed on accountability to shareholders alone — may not be entirely compatible with addressing the climate emergency.”

Indeed, BoF has been vocal in unveiling these issues, spotlighting innovators, sustainability pioneers, and activists. “Imran’s commitment towards consistent coverage of issues on sustainability [as demonstrated in BoF] is nothing short of exemplary, and needs to be emulated,” says Bandana Tewari, sustainability activist, former editor-at-large of Vogue India, and a BoF contributor.

As a media platform, Amed believes his role is to spark conversations and create awareness. “We try to be an agent of change.” A case in point: at BoF’s Voices conference in 2018, fashion’s biggest heavyweights listened as sustainability strategist Rachel Lincoln Sarnoff spoke about the need to tackle microplastics found in fabrics that wind up in the ocean. She told the audience that in 10 years, 70% of fabric fibres will come from plastic, and urged them to reconsider the materials they employ.

Amed notes that fast fashion and luxury brands are equally responsible for this grave environmental toll. The two have learned much from each other: while the former has embraced the marketing and aspiration of luxury, the latter has paid attention to speed and supply chain management to produce more collections. The result? “Every year we are creating and selling more and more stuff,” he says. Vintage for the win

But there are slivers of hope. Thanks to millennials and Gen-Z, the global resale (second-hand) market is set to double to $54 billion by 2024. Amed recalls being an early fan of vintage. As a kid, he would buy vintage Levi’s jeans, much to his parents’ dismay — they couldn’t understand why he was buying old clothes!

These days a growing number of companies are upcyling, attempting to be zero waste, and sourcing locally to minimise their carbon footprint. He points to brands like Patagonia, Eileen Fischer, and Stella McCartney that have integrated sustainable materials into their supply chain and taken positive steps towards minimising their environmental impact. He also cites Kering, the fashion conglomerate, for the environmental profit-and-loss statement it publishes on its performance.

Companies are hiring chief sustainability officers, too. Amed welcomes this, but is cautious. “It is not just a chief sustainability officer issue, this is a C-level executive issue. Because throughout the fashion supply chain, where 90% of waste carbon is created, everyone in the C-suite has a role to play in managing that. Whether it is the fibres used in production or the vendors used to manufacture or the way retail stores are run, each of those touch points has an impact. There’s work to be done throughout the value chain”.

Yet, till consumer behaviour doesn’t change, little else will. When Kate Middleton, Duchess of Cambridge, re-wore a 2012 gown to this year’s BAFTA awards, she was applauded. Actor Joaquin Phoenix has been wearing the same Stella McCartney tuxedo to every awards show. Can this save the planet? Unlikely, but Amed says it sends a message, given that celebrities are so important in shaping mindsets and behaviours. “At the end of the day, people are not going to buy fashion because it is sustainable. They are going to purchase products because they are beautiful and well-made. Sustainability has to be a ‘hygiene factor’ in how we create, and buy. It is a step, a journey of a thousand steps.”