There are many things that you check when you travel, especially to a Muslim-majority country like Azerbaijan. Dress code (there isn’t any), food (the sheki piti, a soup with lamb, chestnuts and white plums, is a must-try). But no one thinks to check wind speeds! Baku, situated on the banks of the Caspian Sea, is also called the City of Winds. And it almost never lets up — thanks to Khazri, a cold wind from the North (at 140 kilometres per hour), and Gilavar, a milder one from the South.

We are welcomed by the former. So our excursions around the city are punctuated by Marilyn Monroe moments (skirts a-flying). Once you get used to the blustery weather, however, the city’s charm takes over. An eastern country with a western outlook, its architecture is varied — from the medieval (harking back to the Persians and Ottomans) and Russian (the former Soviet nation gained its independence in 1991) to the contemporary. Parks, gardens and squares pepper the cityscape, where fashionably-dressed locals gather late into the night; museums are recommended with pride; and the Flame Towers — a trio of skyscrapers that symbolise fire — pop up on the horizon no matter where you are. Two days give us just enough time to catch the highlights. 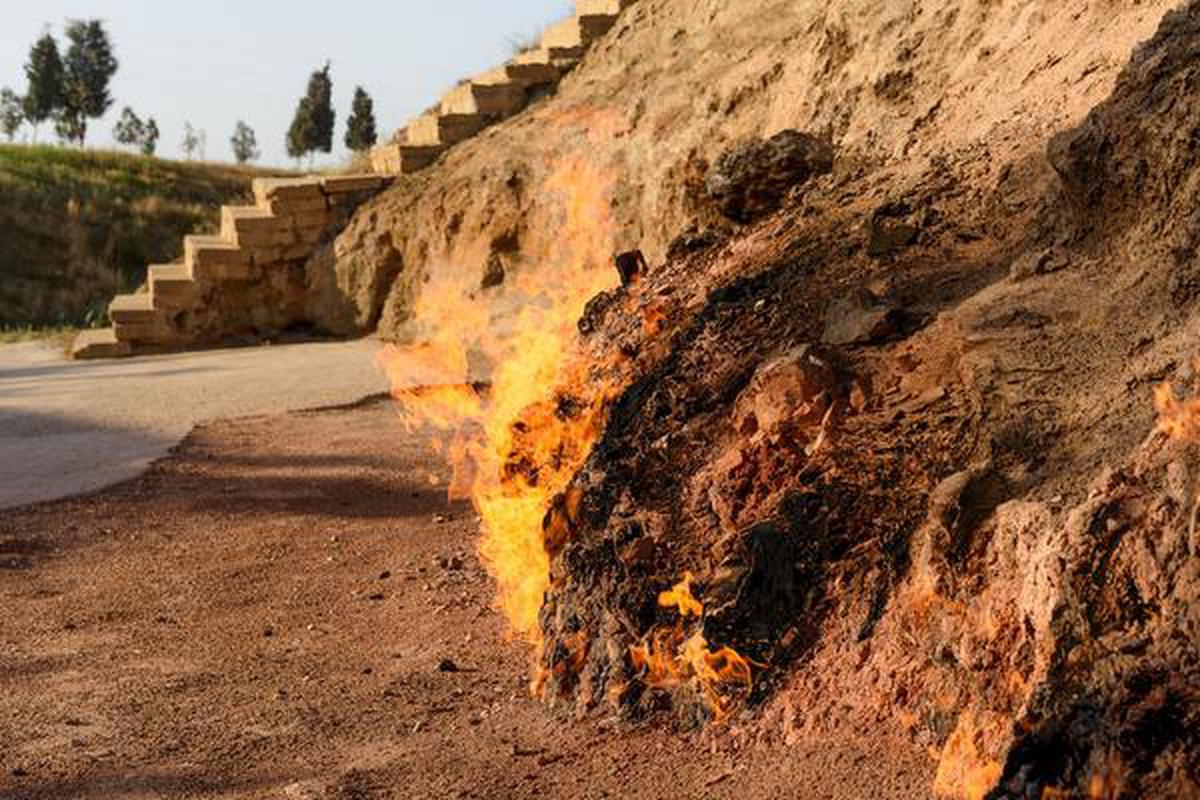 The Burning Mountain is 27 kilometres from Baku. As we drive away from the city, Azerbaijan’s oil associations come to the fore. Drilling rigs pop up, the sole sentinels in large fields stripped bare of vegetation. But little shacks selling cranberries, peaches, figs and mulberries brighten up the drab landscape. As we get closer to YanarDağ, things liven up. Literally. We smell the smoke before we see the flames; a wall of it licking up the sides of a small hillock, crackling and dancing in the wind. Natural gases coming up through vents in the sandstone feed the fire, as it has done for centuries — day and night, through rain and snow. Selfies are mandatory, but caution is advised.

A tip: while there, stick to the concrete paths and steps to navigate the rough terrain. As we explore a museum on site, with ancient household items, and a café, a lone man with a horse offers us rides. The wind is too cutting, so it becomes an opportunity for some more camerawork. Keeping to our fiery trail, we drop by the 500-year-old Fire Temple, a testament to Azerbaijan’s associations with the Silk Route. That history can be seen in the Sanskrit and Gurmukhi script (including an invocation to Lord Shiva) that we spot adorning lintels and walls. Our guide tells us that Hindus, Zoroastrians and Sikhs travelled here, and donated money to build the temple — which has ramparts like a castle and rooms like a traditional caravanserai.

Despite the wind, the fire in the central altar roars up to the ceiling, warming the beige of the surrounding sandstone walls. Today, it is fed by Baku’s gas pipeline, but for centuries, a now-exhausted natural gas field had ignited the ‘eternal flames’. We skirt the excavation sites in the courtyard — work is on to uncover older structures and artefacts — to catch audio-visual presentations and lifelike recreations tell stories of pilgrims, prayers and the past. It is the colours we notice first, as we enter the gates of the Old City later that day — the green of pomegranate trees, the sun-warmed yellow of sandstone walls, and the riot of silks in roadside stalls. A UNESCO World Heritage Site, it is the most ancient part of Baku. Hidden behind crenellated walls, cobblestone paths wind past old buildings, partially-excavated ruins, and sheltered cafés that serve vine leaf-wrapped dolmas and oven-baked tandir breads. Hamams sit cheek-by-jowl with art museums; the minarets of the 11th-Century Muhammad Mosque pierce the sky and the Multani caravanserai welcomes you with glasses of black tea and white cherry murabba (jam).

We can’t make it to the Palace of the Shirvanshahs (dating back to the 15th century), but the Maiden Tower, but the Maiden Tower (where, legends say, a flame-haired girl defended the city from an enemy who had laid siege) more than makes up, with a museum tracing the history of the city’s evolution. Baku at night is spectacular. Spotlights illuminate old buildings, store fronts dazzle and monuments are picked out in silhouette. We, however, climb to the top of the viewing square, built on the highest point in the city, to get the best view. The boulevard fronting the Caspian Sea is trimmed in jewel-like lights, while Soviet-era statues and gardens, and the show at the Flame Towers — lights in various colours undulate over the skyscrapers every night — add to the drama. Battered Soviet-era cars hurtling down dirt roads, while you hold on for dear life, may not seem an ideal start to the morning, but it is exhilarating. Especially when the driver decides to serenade you with old Hindi songs. The barren, almost otherworldly, landscape, heavy with the smell of sulphur, needs this injection of life. Fifteen minutes in, we spot innocuous-looking mounds. Inside, thick, cement-like ooze bubbles. There’s nothing to be heard except the wind and the occasional plop as a bubble bursts. Then cheers split the air, as a dark-haired tourist from Russia takes off his shirt and carefully slides in. Despite the depth of each volcano, the viscosity of the mud helps him float. All’s well until he realises his mobile phone is still in his pocket. Oops!

None of us is in a hurry to try our luck floating, so our chatty driver scoops out some mud instead, and tells us to apply it on our faces. It’s supposed to be great for the skin and for people with arthritis. Well, maybe another time. 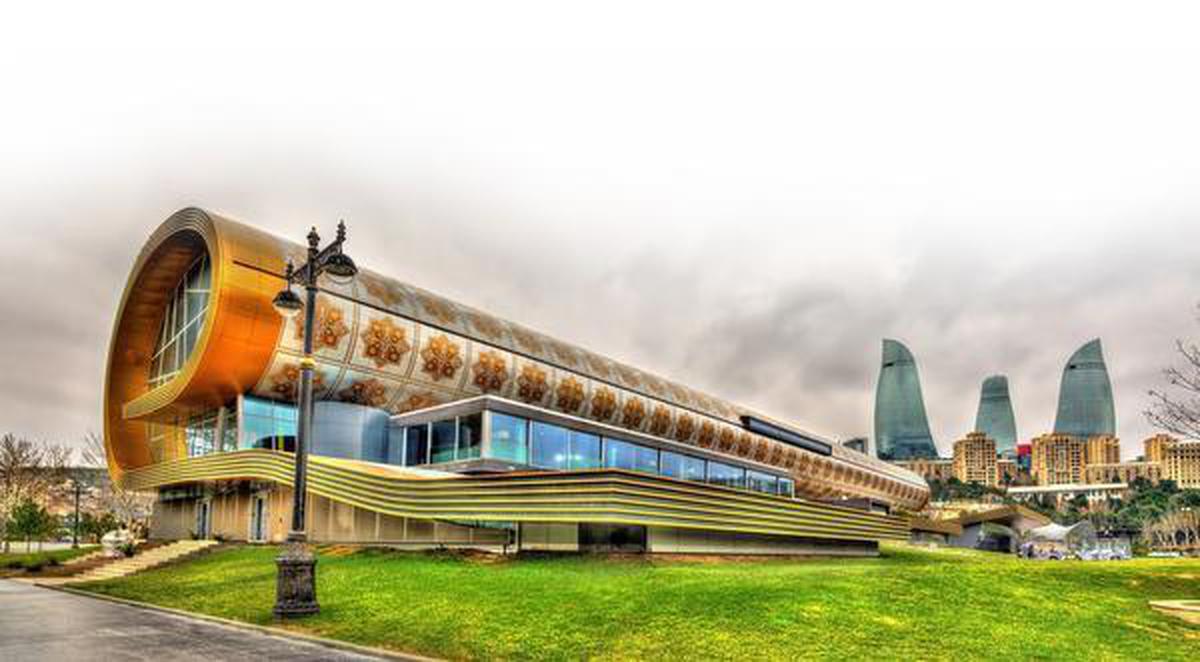 Later that afternoon, as we drive up to the seafront Dənizkənarı Milli Park, what looks like a rolled up carpet captures the eye. Designed by Austrian architect Franz Janz, it is an exhibition space and a research centre — housing carpets from the 17th to the 20th centuries, along with ceramics and metal works dating back to the 14th century. There are woven rugs on walls, on looms, on curved and tilted displays… even laid out floor-to-ceiling in a room outfitted to look like an old Azeri household. You can certainly see why Azerbaijani carpets were proclaimed ‘A masterpiece of intangible heritage’ by UNESCO in 2010.

How to get there

There is an intensity of colour that is surprising, and motifs range from flora and fauna to geometric patterns. But it’s the ones created during the Soviet rule that are a surprise. Each tells a story — be it of revelry, the developing oil industry, or the need to exercise (a painterly depiction of three youngsters running on the beach)! One of their biggest carpets, made with 37 million knots, features Lenin, we are told. We end the day at one of the newest monuments. Designed by the late Iraqi-British architect, Zaha Hadid, the centre is like an undulating Arctic wave. The sinuous, continuous surface connects various cultural spaces in its many ‘folds’.

For those like us, who do not know much about the country’s past, the Heydar Aliyev exhibit throws light on the first president — through interactive touchscreen and AV presentations. Elsewhere, exhibits, performances and talks bring in the best from around the world. At the moment, Zoospective & Morphospective, by the French sculptor Mauro Corda, is attracting crowds, as is an exhibition of nearly 200 rare musical instruments. A few hours are not enough to cover its eight floors. Finally, sore feet ready for a cushioned pouffe, we wrap things up with a photo op at the large ‘I love Baku’ installation outside.

The writer was in Baku at the invitation of Azerbaijan Tourism