Skincare for the lockdown

Workers in navy blue uniforms at Aranya Naturals’ dyeing unit at Nallathanni in Munnar are busy. A row of tables splits the high-roofed space into two; on one side are water-filled basins over which women, wearing gloves, stir the contents. On the other side, inside a glass enclosure, eight women sit around a table tying thread around fabric for shibori; while at the far end 12 metres of indigo dyed fabric suspended by a winch hang over a steel drum. “The drum holds 2500 litres of indigo dye,” guide and floor supervisor, the ever smiling Bhanumathi K says.

Each of the 37 people working here has been affected by a physical disability — hearing and/or speech impairment or other challenges. Together, they create Aranya fabric, which travels across the country and the world from Sri Lanka to Los Angeles and California. 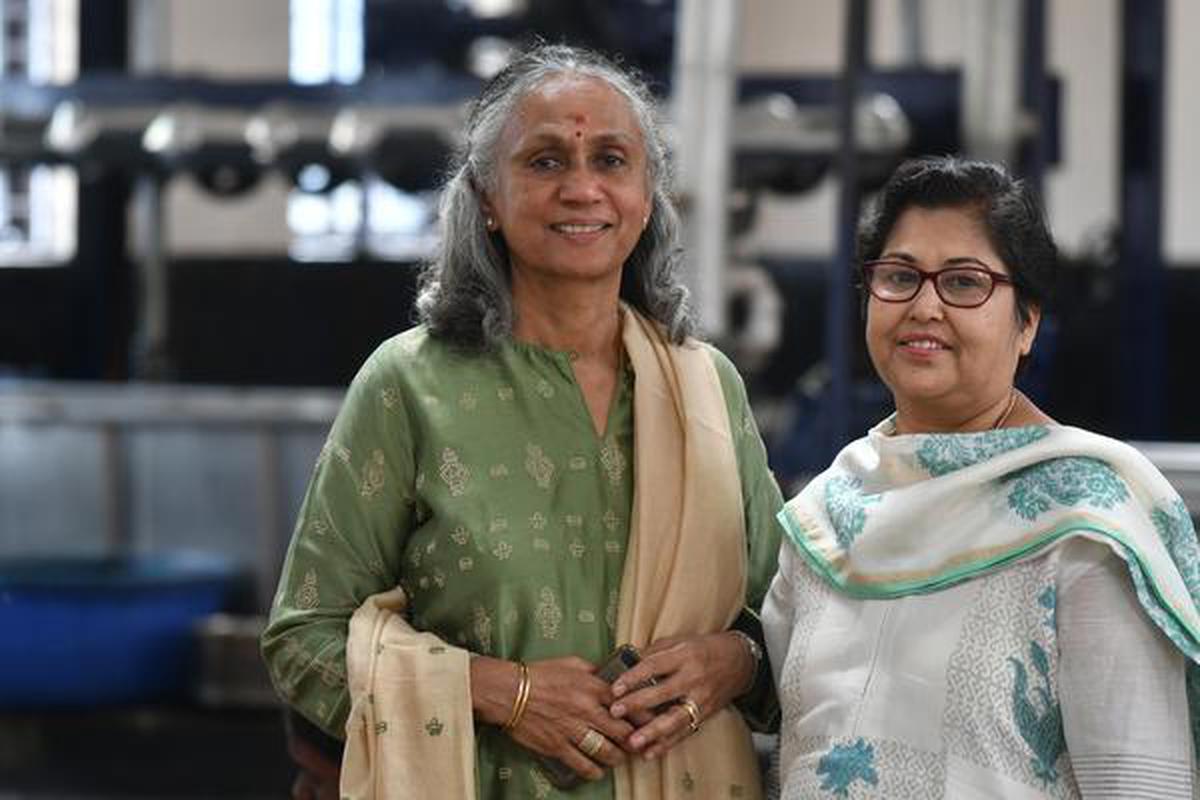 Aranya, which just turned 25, is one of Munnar-based Srishti Trust’s projects. Srishti, backed by Tata Tea Limited (now Tata Consumer Products Limited), has been working with the differently-abled children of estate workers since 1991 and Aranya was formed in 1994. It grew out of an idea that Srishti Managing Trustee Ratna Krishna Kumar had after attending a dyeing workshop. (Ratna’s husband RK Krishna Kumar was the Managing Director of Tata Tea Limited, when it launched.) Right from get go Ratna says she was clear that the project would be for the differently-abled children of estate workers and their rehabilitation.

One of the team’s first clients was Polo (Ralph Lauren) for whom they dyed georgette, silk and chiffon (for dresses). Today, ‘Amari’, the boutique attached to Aranya proudly showcases shawls, stoles, yardage and garments fashioned out of tie-dye, in varied patterns of shibori and itagimi. It is set in a large campus, surrounded by gardens, which the team moved into in 1996. However, the project began in an abandoned shed in Tata Tea’s Nettimudi estate, when the team, turned the space into a lab, using mud pots and a wood-fired stove. These experiments grew into Aranya Natural. 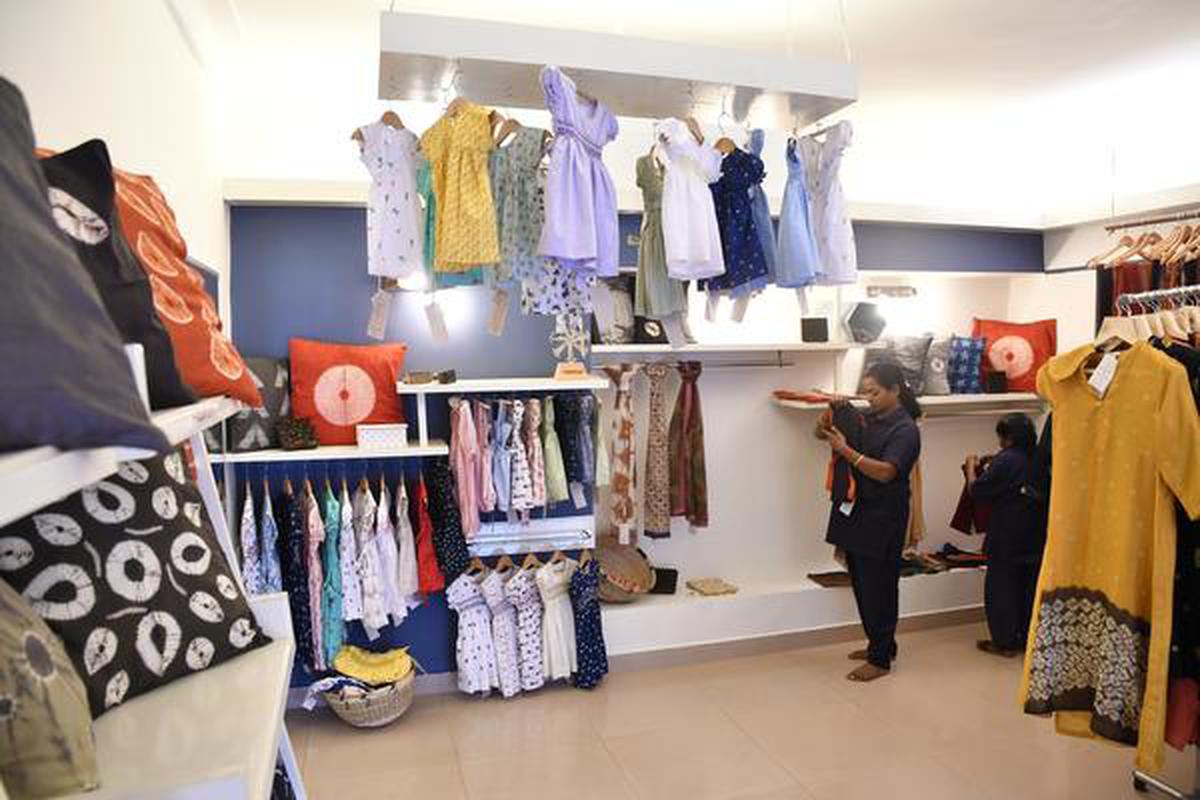 How it began and sustained for a quarter century is an interweaving of lives and stories. If the genesis lay in Ratna’s idea, it was carried forth, with her and Tata Tea’s support, by people such as Victoria Vijayakumar who co-ordinated activities over the years and the differently-abled, like Bhanumathi, who has been with the team for 25 years.

Bhanumathi says she came to Aranya as an 18 year-old, “a Class 10 pass”, in her own words, “with two club feet and nothing much to look forward to.” She tears up speaking of how her life changed because of her work: she is married and has a son, a Class 10 student of the High Range School in Munnar. Most importantly, she is able to support her aged parents. Bhanumathi was among Aranya’s first four employees and the only woman then. 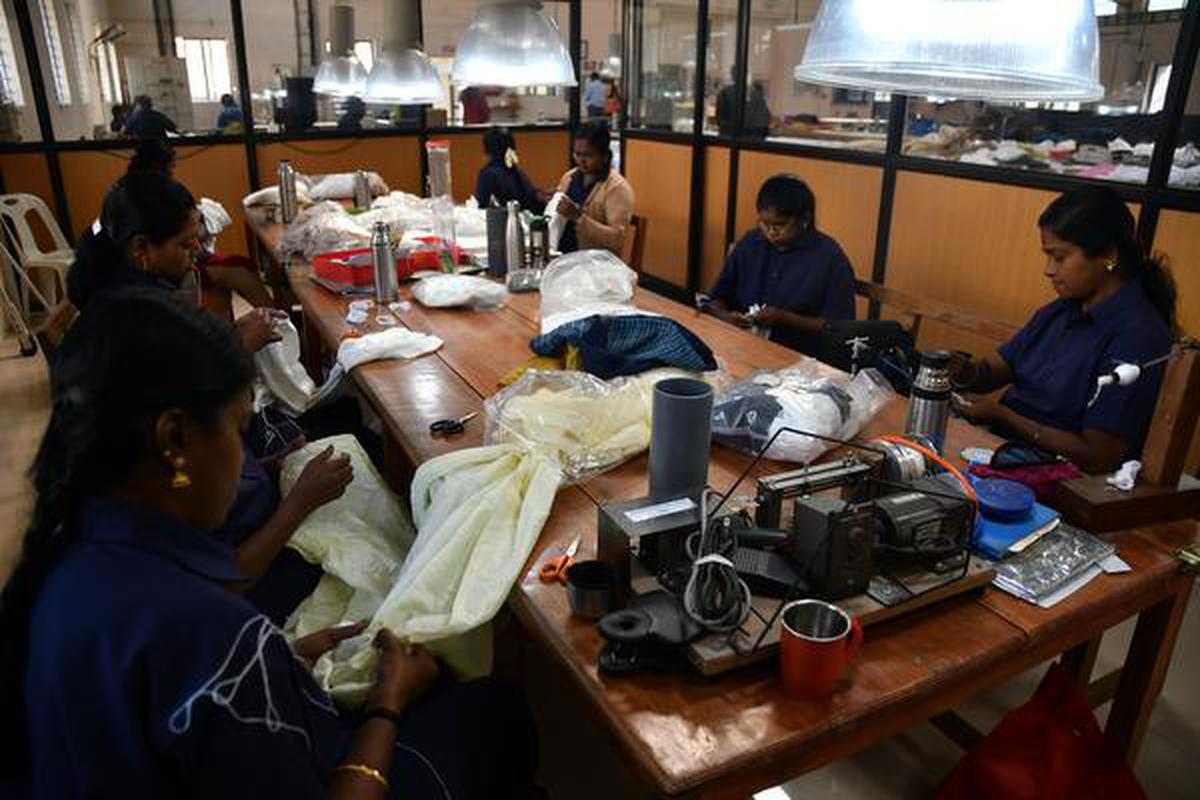 The cheerful co-ordinator Victoria Vijayakumar, Vicky Ma’am to the ‘children’, became part of Aranya serendipitously. She was the translator for the introductory dyeing workshop by Darshan Shah.

“I was translating from English to Tamil for the workshop. I had to focus completely on what was being said, because if I didn’t I would mislead the children,” she says. At night she would pore over the dictionary to check if she got the terms right. “By the end I knew enough about dyeing to become part of Aranya.” She remembers the initial days of trial and error, when along with Ratna she and new recruits would experiment, “the water here has many minerals which makes it ideal for this activity,” she says. The fledgling venture experimented for two years before they started getting their first orders. “By then we felt confident enough. One of the first orders, if I remember correctly, was for saris. Initially it was a nightmare, but we got it right,” says Victoria. Most of the fabric is made to order, therefore the quantity produced varies. Some of the labels they work include Barefoot (Sri Lanka) and Eileen Fischer (New York). They also work with designers, including Kochi-based Sreejith Jeevan, Mumbai-based Riddhi Jain and Sunitha Shankar from Pune.

Raw material, for most of the dyes, is natural and local. Tea waste, eucalyptus grandis, eupatorium (Nilgiri kozha) and ageratum are some of the plants from which the dyes are made. A lot of these come from the forest floor. “We use things that will not be of any other use like barks of trees,” says Victoria Vijayakumar. Fittingly, they also use tea waste since Munnar is tea country. The tea that spills over in the factory during the processes, which would otherwise be discarded, is collected, boiled and made into beige coloured dye.

There is constant focus on training. Victoria has travelled with some of the workers to seminars and workshops across the country, as well as to the United States, the United Kingdom, Malaysia, France, Italy and Japan.

P Arumugham smiles shyly as Bhanumathi introduces him. She holds up a sample of ‘Aru shibori’, his innovative take on traditional Arashi shibori: although patterns are set the team is encouraged to experiment. Japanese dyeing expert Yoshiko Wada, who works with Aranya Naturals, impressed by Arumugham’s creation, named it ‘Aru shibori’.

The pay-off for Ratna, Victoria and everybody else involved is the transformation on the faces of Bhanumathi, Arumugham and others. That look on Arumugham’s face when he explains how Aru shibori is done.

Aranya Natural is at Nallathanni (Munnar) ahead of the KDHP Tea Museum alongside Athulya (hand-made paper unit) and Nisarga (strawberry/fruit preserve unit), which are among Srishti’s other projects. Log on to www.aranyanatural.com for information or to order fabric online. It is open to visitors from 9 am – 5 pm except on Sundays; contact 04865-230340